As a US Citizen, a passport is not required to visit St. Thomas or the US Virgin Islands. However, that is not the case with the British Virgin Islands. It’s only a 30-40 minute boat ride away and customs usually doesn’t take too long. It’s worth the day trip, as it holds some of the most beautiful beaches.

Before moving to St. Thomas, I didn’t really know much about the BVIs. I only really knew about them from family, who use to spend a week sailing around the BVIs. That’s one of the more popular ways to visit the British Virgin Islands.

Many people would fly into St. Thomas, hire or rent a catamaran, and set sail around the 5 main islands. I wish I was able to experience the week long sailing during my time on St. Thomas. However, that experience is not budget friendly. 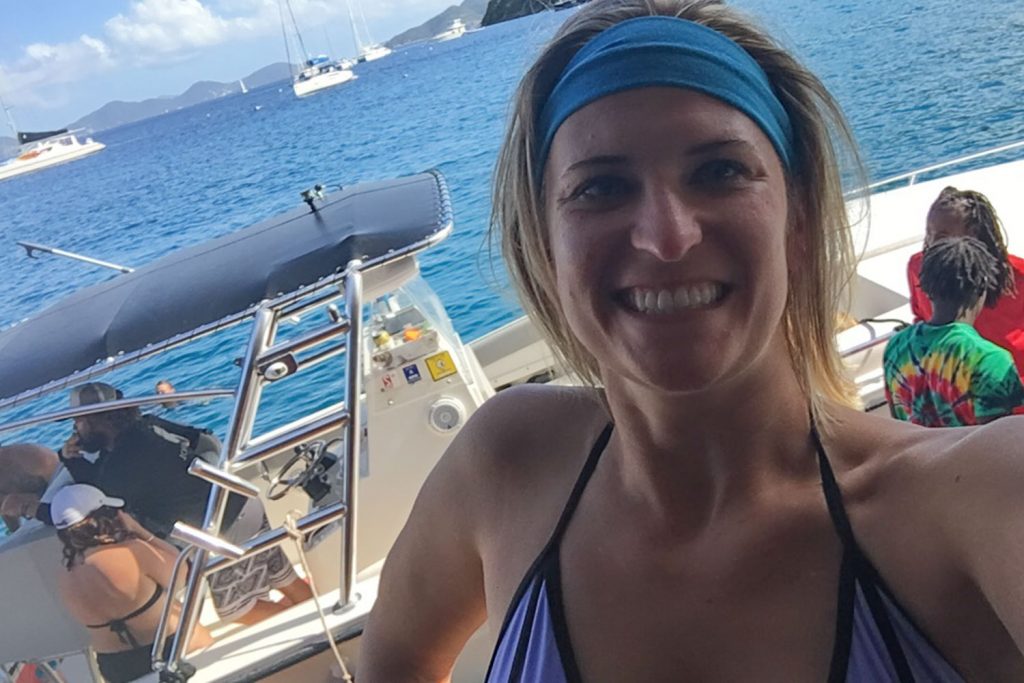 How to Get to the BVIs

With St. Thomas in such proximity, I quickly learned that many of my friends would spend their free days taking day trips to the BVIs. There are countless charter boats that allow groups of people to rent them for the day. When you rent a charter boat for the day, it also will come with a captain. All you need to bring is a good group of friends, all the alcohol and drinks you want, and a fun attitude. Oh, and don’t forget a swimsuit, hat, and lots and lots of sunscreen. The Caribbean sun is NO JOKE. There are also several tour companies that offer day trip as well.

In January 2017, on a Sunday, eight friends and I decided to take a day trip to the BVIs. I had never been before so I was excited to see what all the hype was about. When living on an island, everyone is always taking day trips and talking about how beautiful everything is.

We chose a local charter company called One Love Charters. This charter company were not only friends, but at the time ran the sports league on the island. I am not 100% sure if this particular charter company is still around or not. After the hurricanes hit in 2017, many charters were unable to start business again. But, don’t fear, I know there are endless charter companies still located on St. Thomas. 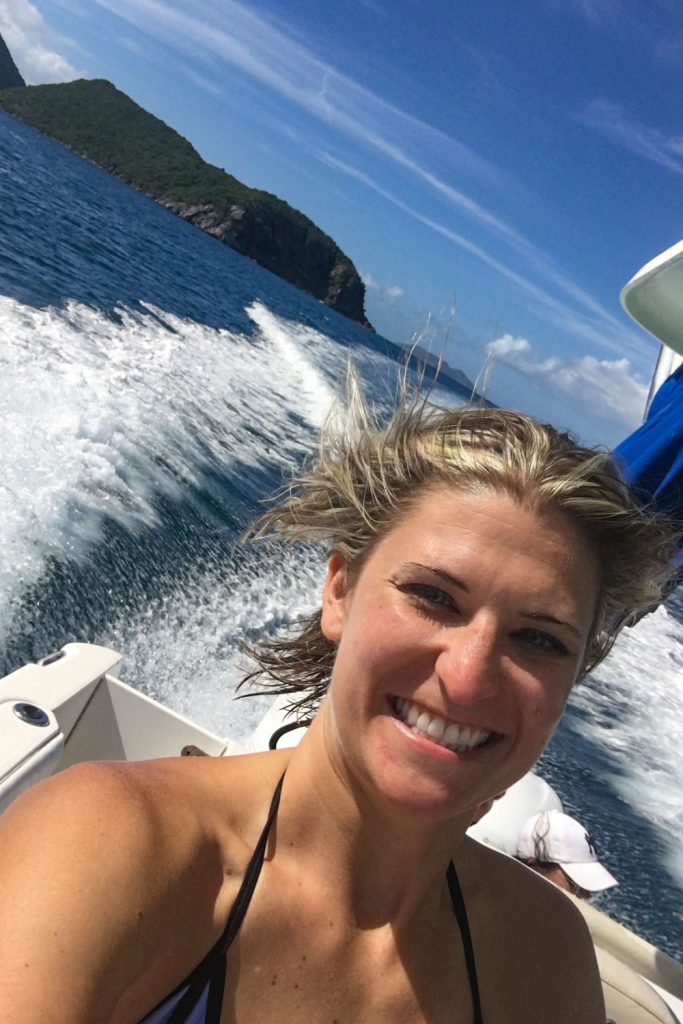 For our boating day, we decided to make stops at two of the main islands; Jost van Dyke and Norman. Both of these islands, at the time, offered us something unique. However, we would have had to stop at Jost van Dyke anyways, because its customs was easier than Tortola, the capital.

The customs office was located in Great Harbour, which is a frequently visited destination. It is home to Foxy’s, probably the most one famous bars and man in the BVIs. Foxy’s is also well known for the is boating extravaganza New Year’s Eve bash! Honestly, not going to the NYE bash at Foxy’s is one of my regrets during my time on St. Thomas.

We, however, did not plan to visit Foxy’s on this day. We had another popular destination in mind; White Bay Beach. White Bay is a must experience when visiting the British Virgin Islands. It is not only a long, white sandy beach with picturesque Caribbean blue water, but it’s home to a famous bar. This bar is known around the Caribbean because it is the creation of a famous beverage.

Have you figured it out yet?

I’m talking about Soggy Dollar Bar. The place where creation of the famous drink called the “painkiller” occurred. Created in the 1970s, the “painkiller” is trademarked by Pusser’s Rum, though it can be made with any run. A painkiller is rum blended with lots of pineapple juice, some cream of coconut, and some orange juice topped with freshly ground nutmeg. The key to this drink is the amount of rum put in it. It’s not just 1-1.5 ounces like a normal shot here in the states. This drink typically have 2-4 ounces of rum, so lightweights beware.

Since it was my first visit to the BVIs and Jost, Soggy Dollar was our first stop. I went straight to the bar as to not miss the experience of a painkiller. That painkiller was delicious and a perfect beverage for walking along the white, sandy beach, and playing in the water with friends or family. That is exactly how we spent our morning at Jost van Dike. My first time visiting the British Virgin Islands was off to a fabulous start. 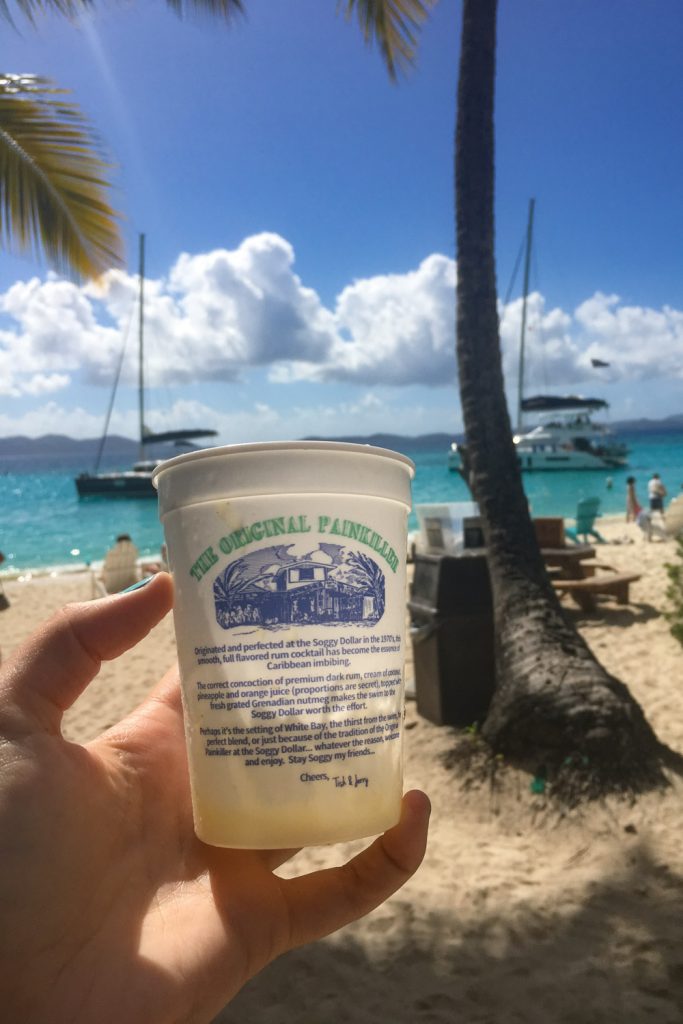 After we were all finished with out painkillers, we headed off to the next beach. Sandy Spit Beach was a tiny sandbank type island located off the east coast of Jost. It’s a near perfect circle island with sand surrounded a small patch of plant life with views of Jost and Tortola. Sandy Spit, which unfortunately did not fair well in the 2017 hurricanes, was so small it only took about 5 minutes to walk around the entire island. 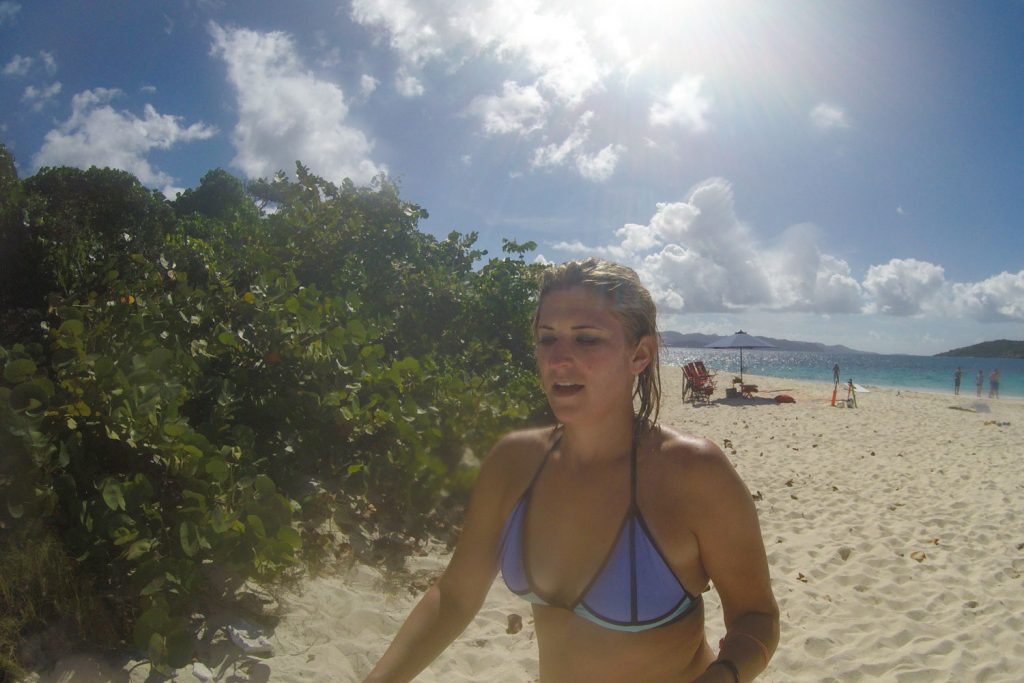 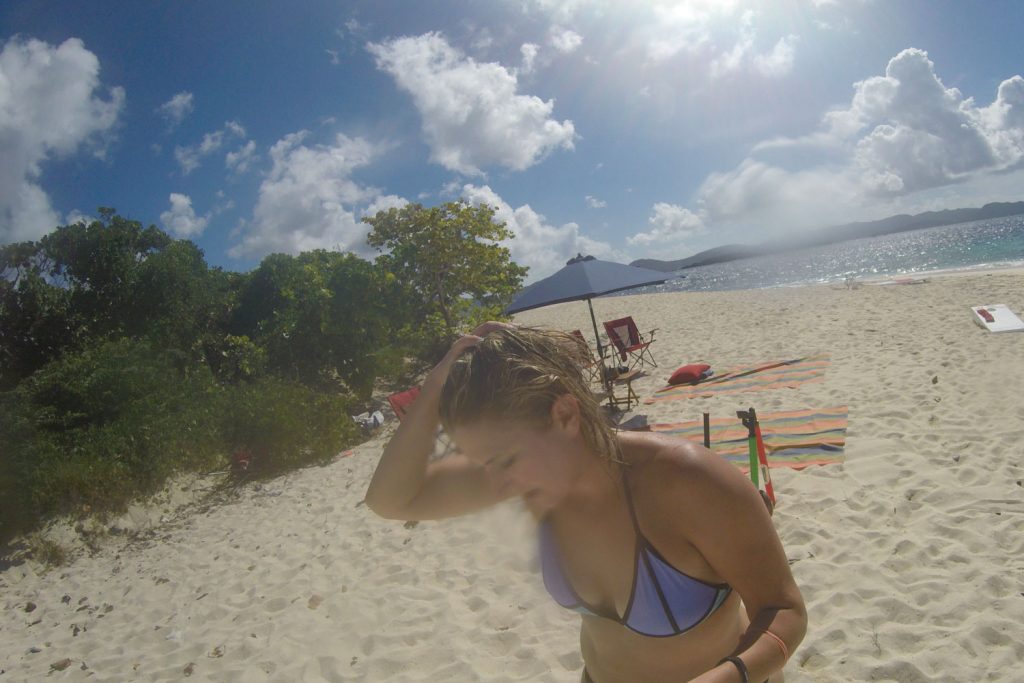 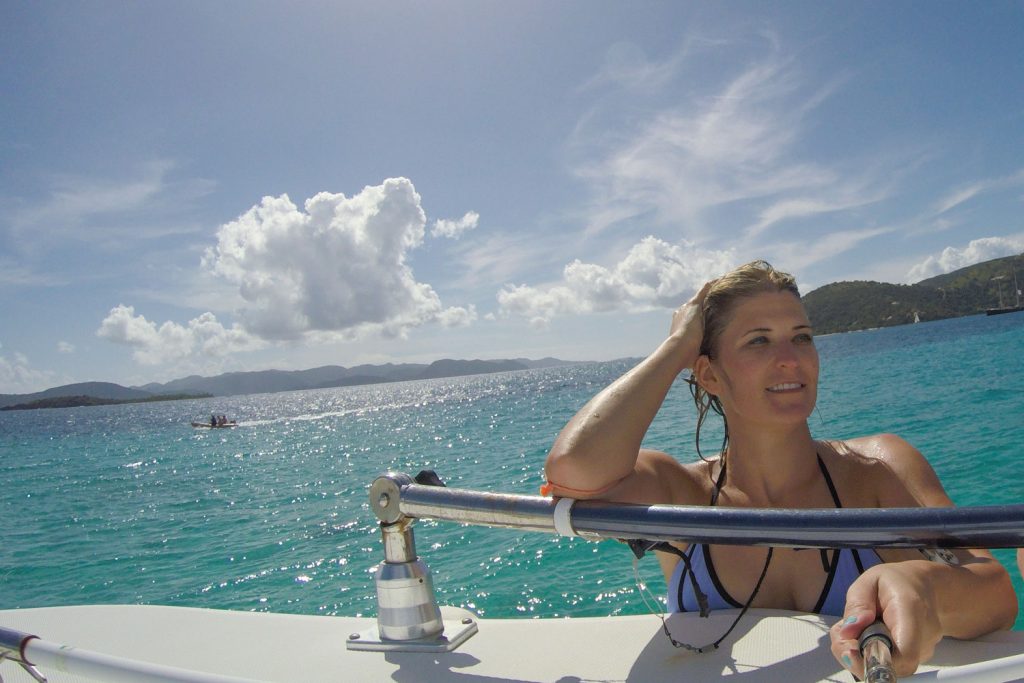 Our final destination of the trip was to an island called Normal Island. Norman Island is known for two things. The first is that it is thought to be one of the islands that inspired Robert Louis Stevenson’s Treasure Island. I have been told that from above, Norman Island is the same shape as the map in the book.

The second is that Norman Island is home to the famous Willy T’s bar. Willy T’s is a large boat turned restaurant and bar that is popular among the day trip crowds. It is known in the Virgin Islands community for it’s second story edge, where you can watch countless people jumping off the top deck. Sometimes, butt naked.

If you know me, you know I LOVE adventure, so there was no way I was leaving without jumping off the top deck. I did choose to remain clothed, but nonetheless, the jumps were incredible. After all, how many people can say they have jumped from the Willy T’s in the British Virgin Islands?

Willy T’s is a nickname given to the boat of William Thornton. William Thornton was the architect for the US Capitol Building. It wasn’t always the Willy T’s we know and love today. It began as a Baltic trading vessel until 1989, when the wooden boat became a restaurant. It’s been about 6 years since the replacement from the original wooden boat to a steel shunner.

(That boat has since been lost to Hurricane Irma and has been replaced with another. At this present time, I believe Willy T’s has returned to it’s home at Norman Island of Willy T’s. In 2018, there were some issues between the government, island, and the owners and apparently Willy T’s was to move to another island. That is what I call drama in the Caribbean.)

After a few beverages, several jumps, and some food, my first time visiting the British Virgin Islands came to an end. We made our way back to home with a quick pitstop in St. John to recheck into US Customs.

All in all, it was an amazing first visit even though I came home exhausted, slightly red, and a little intoxicated. I guess you could summarize this trip as a “perfect day in the Caribbean.” The BVIs were more than I could have imagined. There are still several other places I want to visit in the BVIs, but this was a great first visit. If you ever get a chance to visit St. Thomas or the British Virgin Islands…don’t hesitate. There is so much to do, so many beaches to visit, and a number of different islands to explore. 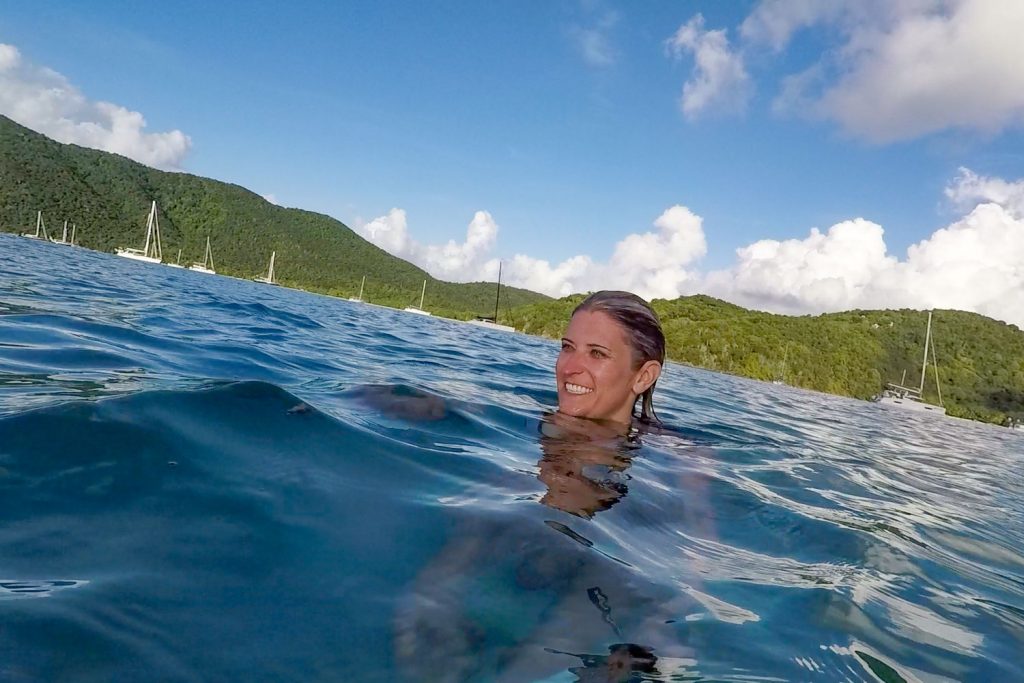 Next up for me, The Baths on Virgin Gorda. 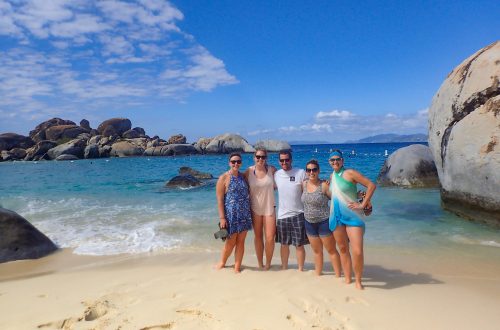