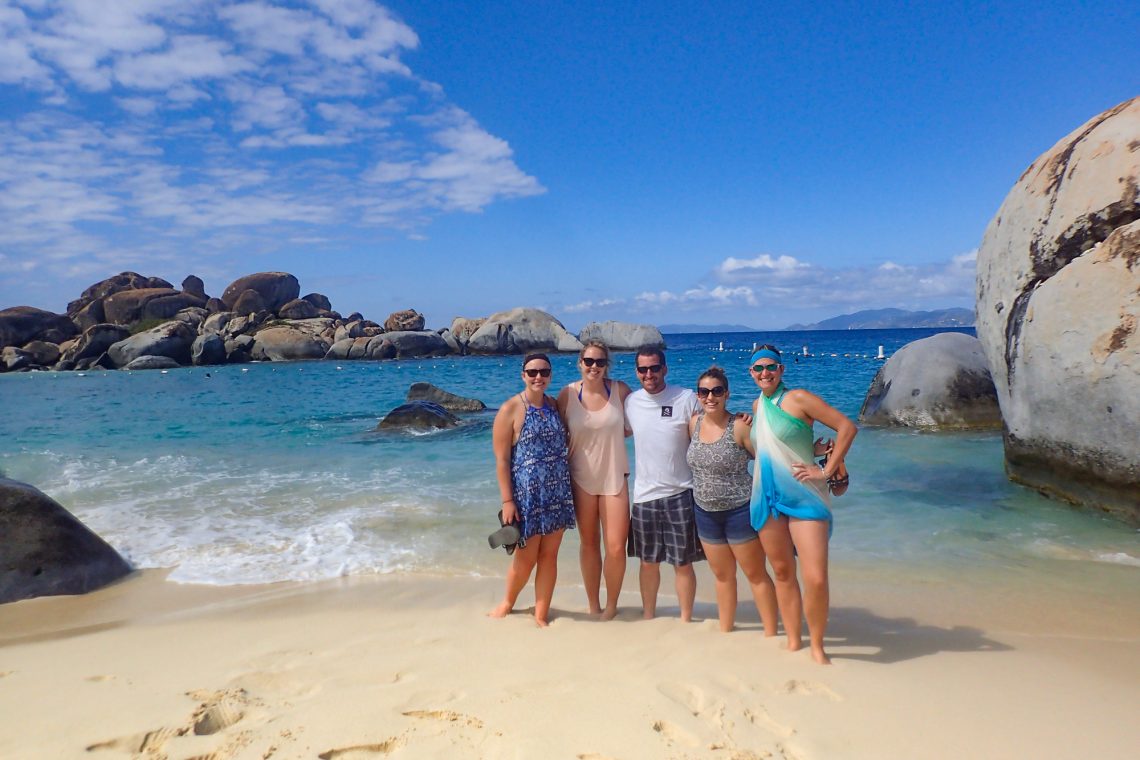 Life in the Caribbean has taken off in a full sprint. In January, I ventured to our sister islands, the British Virgin Islands (BVIs), for the very first time. By March, I went an additional two times, each time to a different island. When traveling from the USVIs to the BVIs, you must pass through customs which means, a stamp for each visit.

About the British Virgin Islands

It’s made up of 4 primary islands: Tortola, Virgin Gorda, Anegada, and Jost Van Dyke. Additionally, there are over 50 smaller islands and cays, in which approximately 15 of those islands are inhabited. Again, think of this in accordance to size: 52 square mile of land, split between ~54 islands.

The largest island, Tortola, is 12 miles x 5 miles and one large mountain. As my only concept of Tortola is Customs, I’m not going to get into too many details about that island. I haven’t experienced any adventures there, so I don’t have much to talk about.

My first official BVI experience was on the island of Jost van Dyke, famous for Foxy’s and Soggy Dollar, home of the original pain killer. The next two visits were to two other main islands, Virgin Gorda and Anegada. Each of these islands have something unique to offer and each trip was a completely different.

My trip to Virgin Gorda was a group tour with friends and my two cousins, who were visiting. They were visiting from Iowa, USA and I couldn’t let them come visit without taking a trip to the BVIs. I also couldn’t let them leave this island without spending a day on a boat. Thankfully, living on a tropical island, it was easy to combine the two.

I selected for us to go with a charter company called Calypso on their boat Bad Kitty. Bad Kitty offers a tour of the BVIs, which consists of 5 stops on 4 island. The first stop was customs on Tortola but they may also stop in Spanish Town, Virgin Gorda.

The next stop is the big highlight, Virgin Gorda. Virgin Gorda is the third largest and second most populated island. It’s name “The Fat Virgin” is because the island’s from the horizon actually looks like a fat woman lying on her side.

The Baths are created from granite boulders forming covered “pools” along the sea. Visitors wander though these boulders into different pockets or rooms. Did I also mention that there are only TWO of these types of formations IN THE WORLD?!?!?! Can you guess the location of the other one…The Seychelles! Seriously, I can’t believe I live so close to something so rare in this beautiful world.

How was this formation even formed? Through researching, I learned that molten seeped through various rock layers. When it cooled, it created

“the hard crystalline granite layer. Further shrinkage and cracking formed blocks, which were exposed when the softer volcanic rock above eroded away. Weathering rounded the corners of the boulders to what they are today.”

It’s actually quite an amazing sight to see. The Baths are one of the most popular destination for the BVIs. It was on my “must see” list for the Virgin Islands and I knew it would be special to visit with family.

The Baths being included in Bad Kitty was one of the primary reason I selected them. They are also a cost effective option to get to experience additional islands to Virgin Gorda.

We headed to Norman Island next for a little snorkeling before heading Jost van Dyke. Jost can Dyke is a common day excursion from St. Thomas for two famous bars, Foxy’s and Soggy Dollar. Soggy Dollar, which located on White Bay, was our destination on Bad Kitty. My friends, cousins and I didn’t hesitate and headed straight to the bar for our pain killers.

A painkiller is a Caribbean staple and was originated and perfected at Soggy Dollar in the 70s. Its flavor profile is the perfect blend of rum, pineapple, coconut, and orange topped with nutmeg. A must-drink when in the Caribbean!

Honestly, taking a charter like Bad Kitty was really the best way to spend a day island hopping. We started our day at the Baths, ate lunch and snorkeled in the middle and ended our day drinking Painkillers on White Bay, Jost van Dyke.

My next trip to the British Virgin Islands took me to the further island called Anegada. In St. Thomas, Anegada is known for it’s Lobsterfest that takes place each year around Thanksgiving. It’s also a popular destination for long weekends or holidays, because the beaches are beautiful.

What I learned definitely made the trip worth every hour spent on the ferry. Yes, HOURS. It lies about 35-40 miles northeast of St. Thomas and between picking up additional passengers and customs it took 3 hours to arrive at our destination and about 3.5 hours to return home. Makes for an extremely long day, and I have learned that I get quite bored on these long boat rides.

Let’s start with some basic statistics. Anegada is the second largest island in size approximately 32 square kilometers, has a population just shy of 300 and the highest point above sea level is 28 feet. Literally, this island is completely flat and absolutely abnormal for the volcanic region of the Virgin Islands. You could say, it’s the odd duckling of the VIs and that’s not really far off.

Unlike majority of the other islands, Anegada was created from coral and limestone, which is one of the reasons it lays flat and low at 28 feet. On the boat, it felt a bit freaky because you can’t see the island until your about 100 yards off its coast, so you are just starring off into the horizon.

As this island is so flat, it’s one popular activity is to rent motorbikes or scooters. I have never ridden a scooter before, like EVER, let alone on a tropical island in the Caribbean, so when our “Commissioner of Fun” mentioned she wanted to rent scooters, well, you can imagine that neither of us said no.

We got our scooters almost immediately upon docking and took off on our exploration of Anegada. We started by taking the main road to Loblolly Bay, which upon arrival realized how breath-taking and unimaginably beautiful the white sand beaches are with the contrast of the Caribbean blue sea. While at Loblolly Bay, we dined at a local bar/restaurant for lunch called Big Bamboo, where I devoured a Lobster sandwich and a pain killer, because why not. And, as we were sitting at lunch, some guy walks up from the beach holding a MASSIVE, seriously MASSIVE lobster; right off the beach, all nonchalantly, like it was no big deal.

We continued our “Tour by Scooter” to the next location known as Flash of Beauty Beach, which was mentioned to us from other people on the ferry. This particular location was perfect for snorkeling, with the many channels of coral. However the winds, swell and drift were quite strong so we didn’t last long in the water, which was fine as we still had the complete other side of the island and the Settlement.

The Settlement is the main and only town on Anegada but be careful because if you’re not paying attention and you blink, you will completely miss it. The town consists of a select few buildings including but not limited to a small clinic, a small school, a post office, a library, a few stores and restaurants and a government building. I have to say, I think this was the smallest town I’ve every visited.

The rest of the afternoon consisted of scootering around the western side of the island in search of the flamingos. Yes, wild flamingos. Another popular reason to visit Anegada. Unfortunately, we had no luck finding flamingos but it didn’t take away from all the beautiful beaches, scooting adventure, and exploring that occurred on this flat island.

The British Virgin Islands are loaded with uniqueness and beauty and should be a destination for any and all travelers, explorers and adventurers. I can’t wait to return and maybe venture to a new island. 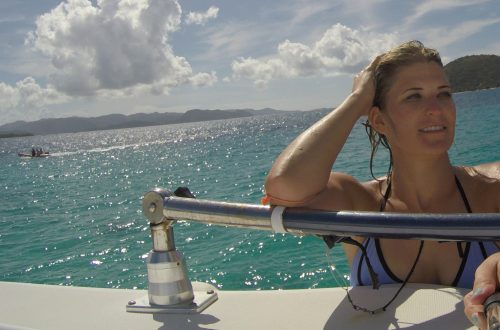