In October, I ventured north across the US/Canada border to race in the Inaugural Rock N Roll Vancouver Half Marathon, which ultimately means “MINI VACATION”. (You can read about the race here).

I’ve been planning on running this race since mid June just shortly after accepting a new position. Thankfully, I was able to get several days off to take a long 5 day weekend. Like the times before, I selected to stay at the Samesun Hostel right on Granville Street, located in the heart of downtown. Now, I know what you’re thinking…”why on earth would you stay at a hostel if you’re there to run a race?” Well, that’s simple. It’s great for solo individuals on a budget. You get to meet so many people from all over the world (new friends), you have a bed (sleep) with roommates (new friends), and you are close to the action (fun). How does that not sound like a win-win. I know it does tend to get noisy in hostels but that’s what headphones and earplugs are use for.

Vancouver can be tricky to get to if you don’t know where you are going, and since I’ve been before once I entered downtown I was able to locate the parking garage immediately. Once checked into the hostel, I immediately connected with one of my hostel mates who I noticed getting ready and asked to tag along (which you can’t be afraid to do at hostels). She said yes and I’m glad she did. We ended up enjoying a great night out on the town with several other hostel mates (and we may have stayed out too late and drank a few beers). I knew I wasn’t going to be able to go out very much during my first few nights here and I don’t do well just sitting at the hostel, so I’m glad I started on such a high.

The next day was a day I was looking forward to for sometime. There had always been one tourist attraction that I felt I was missing every time I’d come to Vancouver and since it was only Friday (2 days till the half), I knew I had the perfect opportunity to go there. Where’s there? I’m taking about Capilano Suspension Bridge Park.

Capilano Suspension Bridge Park (CSBP) is located approximately 30 minutes outside of the city center and can be accessed easily by car or bus. In fact, CSBP offers free shuttle services (times vary depending on season) that pick up and drop off at several locations around downtown, providing easy access to/from the park. Utilizing this service, I didn’t have to stress much on transportation and could spend a little extra time researching about the park. Here’s a quick summary taken from Capilano Suspension Bridge‘s homepage:

“Capilano Suspension Bridge crosses to towering evergreens, cedar-scented rainforest air and Treetops Adventure, 7 suspended footbridges offering views 100 feet above the forest floor. The new Cliffwalk follows a granite precipice along Capilano River with a labyrinth-like series of narrow cantilevered bridges, stairs and platforms and only 16 anchor points in the cliff supporting the structure!”

The suspension bridge itself was built in 1898 and is Vancouver’s most popular tourist attraction. It stretches 450 feet across and 230 feet above the forest floor and Capilano River. The park is 27 acres large  and new attractions being added since it’s opening. Other attractions around the park include the Treetop Adventures, Cliffwalk, Kia’palano (BC’s first nation people history), and the park even offers live guided nature tours. During the winter months, don’t forget to stop by the nighttime Canyon Lights attraction. This is a MUST DO activity when visiting…and it’s fun for all ages.

I ended up spending several hours around the park and was in complete “ahhh” walking over the suspension bridge multiple times. The weather was perfect so speed wasn’t a factor. I have this thing with nature; whether it’s simply just walking around the wilderness or exploring a park, nature has this way of bringing me back to my center. This park has much to offer someone who enjoys experiencing new adventures.

After exploring for hours, I made my way back to the hostel where I met up with my roommates for an exciting night out on the town. I knew I wouldn’t have much time to go out because I was there for a race, so I wasn’t going to pass up an opportunity to spend a night out in Vancouver.

The next day, Saturday, I was able to meet up with a friend I met during my first trip to Seattle nearly three years ago. She has been living in Vancouver for about a year. Today was a bit rainy but it didn’t stop us from enjoying a delicious brunch, and venturing around downtown and to Granville Island. Of course, we decided to do a little Granville Island Brewery tasting, which I haven’t been to Vancouver without drinking there.

I decided to take it easy this night because the next morning, Sunday, was my big race. The evening included getting dinner with Adrienne and enjoying some hilarious time with all my hostel mates, who were all drinking and getting ready for the big night out. There was quite a bit of alcohol consumed and many drinking games, which from a bystanders opinion was entertaining and quite enjoyable. I hit the sack early and was blessed with amazing roommates, who were kind enough to be very quiet when they arrived home in the early morning hours (2 AM) to allow me to get a good night’s sleep. Talk about support.

The next morning was the race. You can read all about it here on another blog post.  After the race, feeling exhausted and finally having a shower, a fellow hostel runner Donnie and myself ventured out for some food. I always feel like a massive burger after exercising and that’s exactly what we ate. We ventured down Granville Street to a local restaurant called Stackhouse Burger Bar and enjoyed a very juicy and meaty burger and fries.

Following lunch, we headed back to the hostel to relax and enjoy many beverages (as well as icing several body parts). The night continued with some entertaining moments and resulted in a semi-early bedtime as dehydration kicked in.

I knew my time in Vancouver would be short and sweet, but I couldn’t have imagined the weekend I had experienced. The amount of fun, laughter, memories, and friendships I made was more than I could have asked. The race, although injured, was still an amazing experience and I am happy that I was able to be apart of the Inaugural year for the Vancouver RnR Half Marathon.

Stay tuned for the next Mapless Adventure… 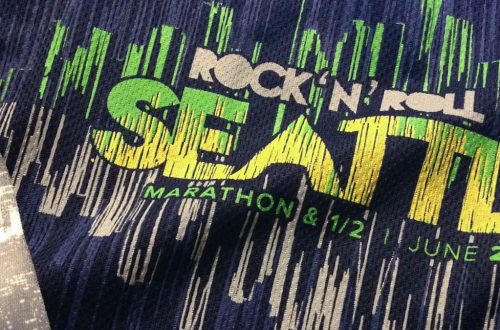